Eric (the Dad) here. Ok, so we've been doing this crazy boomwhacker thing since February, 2008. Seven full years in a couple months. The kids play, Danielle talks. I sit there. What is that all about? Is that all you do, Eric?

Actually, about a year ago Danielle took pity on me and made me the Official Clapper of This Way Up (OCTWUP) during Onward Christian Soldiers. The song where they get faster and faster, you know that one? So I have a function, but mostly, I just sit there. I'm the audience. I rile up any kids in the audience. Oh, and I drive the truck.

Actually, I do have a function. I build stuff, usually in a way that no one else would ever have thought to do it. I built the whole boomwhacker table setup, including Big Moe. Here's is the original setup from 2008, before we had to repair him four times (so far). He originally had cuffs, so he looked like he was going to the prom. Look how clean he is!

When the kids started to do more songs, they needed more bars on the metallophone for songs like the Nutcracker Medley, all the sharps and flats. We only had the model that had room for 8 notes, so they couldn't really use it to its full potential. So I built a custom metallophone case too, with the help of my good friend and master cabinet maker, Ed Moreau. I made the mistake of taking Danielle with me to the lumberyard, so it has all these exotic woods in it like lacewood and wenge. It 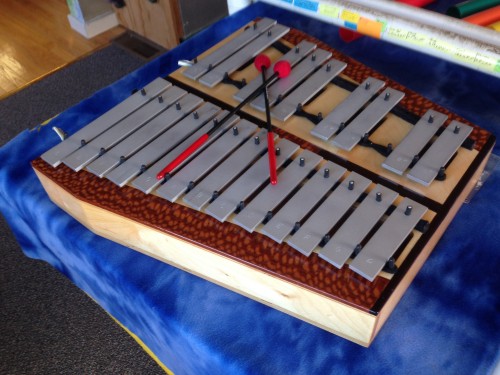 was a fun project and turned out nicely, but stressful, because I'd never made a musical instrument before.

I've had lots of other projects in 20 years. It would be fair to say that all I do really in life is go from one project to the next.

So what is the next project, you may ask. Well, we have a garage at our home south of Dillsburg that was probably the main reason I moved there fourteen years ago. It was going to be my woodshop. It's 36 x 30, two stories, 16 foot ceiling on one whole side, around 1,600 square feet. We're busting as the seams in the basement of Danielle's business where we keep all the musical instruments (I even built more than 130 linear feet of shelf space down there, but, alas, it's all full). So for my next trick I thought I would turn a garage into a music studio! Ta-daaa!

Problem is, the building has pretty much not been used almost since we moved in. Danielle opened her own business in 2002, two years after we moved there. So I've been pretty busy building stuff for her at the office, cabinets, shelves, display cases, the downstairs, the upstairs, the lab, the outside, the bathroom... That meant doing things at the house was low priority, to say the least. 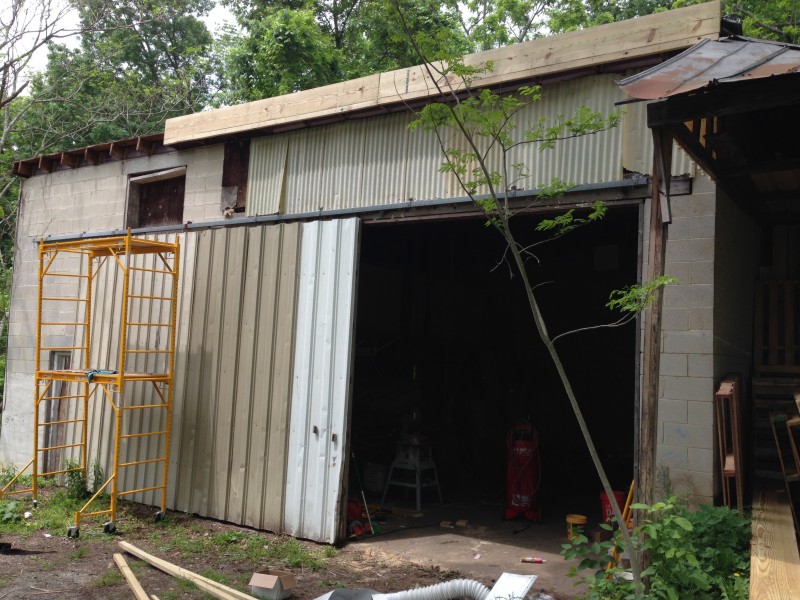 So the garage is in bad shape. The roof leaks terribly, water comes in the foundation, there are bees living it, snakes living in it (don't tell Danielle). No water or sewer, no insulation at all. Some of the windows don't actually fill the space in the wall, so there are big holes around them. The front door is a closet door that the previous owner put in (not kidding). I don't have a picture of it before we started, but here is one from June of this year. I've pretty much been thinking about, dreaming about, worrying about and researching about the new "studio" for the past 17 months. Our official start date for the project was April 12, 2013, because that was the day the dumpster was dropped off to get rid of twelve years of accumulated junk. We filled that bad boy UP! 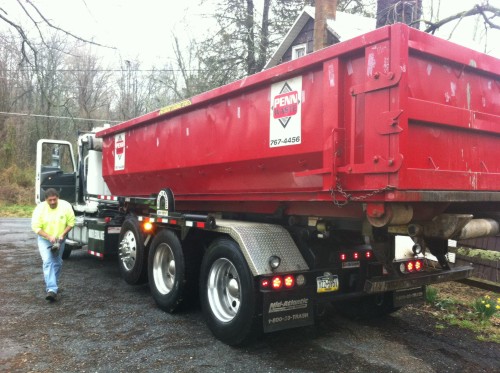 So here are the two rules for turning the garage into the studio. We decided to call it a garage until the outer envelope is completely closed up, so it will be called that for quite a while, I'm afraid. (1) The building has to be functional as a studio: dry, quiet and soundproof. It has to have space to play, practice and record music. (2) It has to be built as much as is possible without borrowing money.

Twenty-some years ago we moved into a row home in York Haven and I spent 8 years remodeling it room by room. I added two bathrooms, a bedroom, dug out the basement, learned plumbing, electric, construction. I learned a lot and I don't think I took a single picture along the way. Well, maybe one. I thought this time I would show people what I was doing and share some of the things I've learned.

So that's the plan. Should be no problem, right? We'll be picking out paint swatches before you know it.

Talk to you again in a month or two -- Eric (OCTWUP)